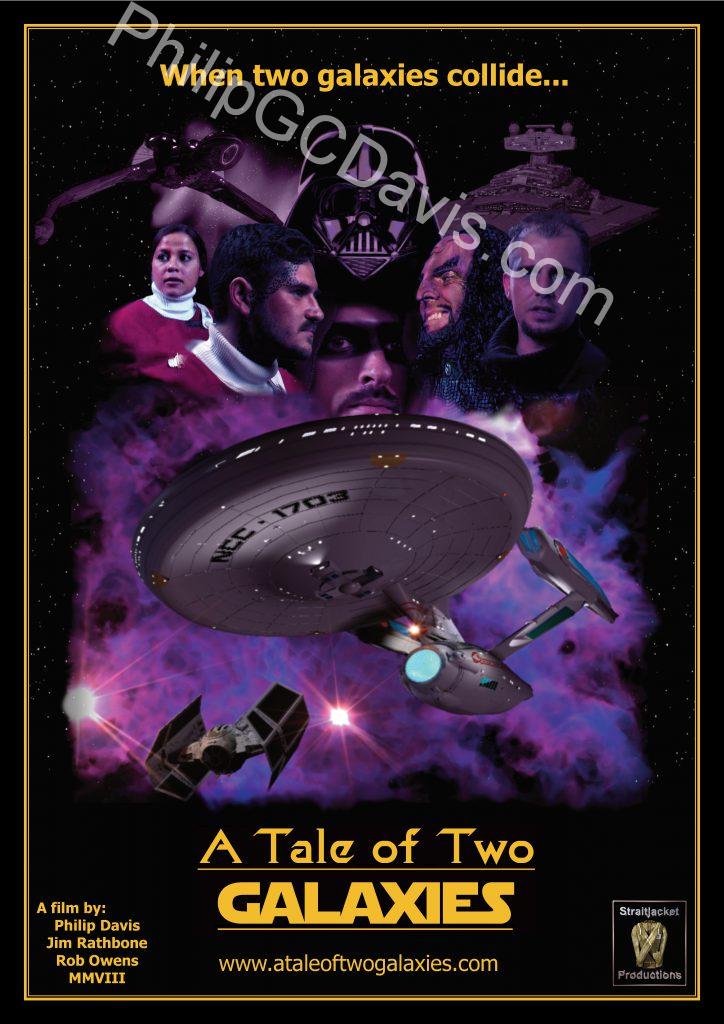 About ‘A Tale of Two Galaxies’

What if the Universes of both Star Trek and Star Wars collided? How would the peaceful exploration, curiosity and pioneering spirit of the United Federation of Planets and her allies compare against the mysticism of the Jedi Order, the might of the Galactic Empire and the power of the Dark Side of the Force? Would it be a fair comparison?

“Long Live the Empire!”is set in the Star Trek universe, twelve weeks after the events of “Star Trek VI – The Undiscovered Country” at a time when the Federation’s new non-aggression treaty with the Klingon Empire {the Khitomer Accords}  is still in the tenuous early stages, with mutual mistrust abound.

“Long Live the Empire!”  introduces the crew of the USS Hood, a Federation Starfleet Constitution Class refit starship and sister ship to the Starship Enterprise. The Hood is sent to investigate a gaseous anomaly, the Amythyst Nebula, on the Federation/Klingon border. A mysterious operative – purportedly a Starfleet Intelligence observer, Deputy Director Hastings, is interested to learn what he can about the unusual readings eminating from the nebula cloud. When the Hood and her crew are attacked by hostile aliens from another galaxy the Hood’s new First Officer, Commander Hendu Lo’omis, has a difficult first day on the job, deciding who to trust, and with life or death decisions to make.

“Revenge is a Sith Best Served Cold!” is set in the Star Wars universe between “Star Wars Episode III – Revenge of the Sith” and “Star Wars Episode IV – A New Hope”. Th Old Republic has crumbled – It is a dark time for the Jedi order, many of whom have been hunted, murdered or forced into exile by the villainous Sith. One such Jedi-in-hiding, Master Jin To’nik, is aboard a rebel X-Wing in the Lianna system when he detects the unscheduled arrival of the USS Hood.  Unfortunately the strange disturbance in the Force doesn’t go unnoticed and Sith Lord Darth Vader dispatches an Imperial Star Destroyer to capture the alien intruders in order to stop them returning to the Milky Way with word of warning. Commander Lo’omis and his crew must act quickly if they wish to survive, and suspecting an imminent invasion, shady operative Hastings takes matters into his own hands. 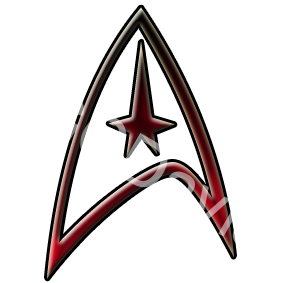 With a cast of nine people, one cat and several Tribbles, and a production team of just three headed up by Philip Davis, the inspiration for this ambitious project came from the desire to learn something, have fun and showcase the skills of the production team. Philip Davis has a degree in Animation, and Rob Owens in Design for Interactive Media, and the guys were looking at expanding their skillset by learning some 3D animation software. It was around that time that Philip became aware of the largely American-led fan-film community, and after watching a few decided he had what it took to produce a project to better or equal the best of them. Producing a Star Trek/Star Wars film for internet release also more or less guaranteed them an audience, so a short animation of a Federation starship destroying a few Tie fighters evolved into a full movie script incorporating live action, and Philip now had to consider procuring actors, sets, costumes, pyrotechnics, lighting and recording equipment. 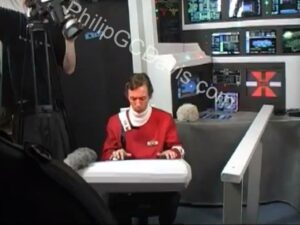 As Philip developed a script, his friends agreed to play most of the characters and he set about sourcing the costumes and collecting and scavenging  bits and bobs, over several months, to build the sets, including large peices of the neighbour’s shed which {as luck would have it} they were demolishing. He also borrowed a smoke machine and bought several LEDs and light gels, and designed the sets to fit around the existing furniture and fixtures in their front room. Phil and Rob also created Flash animations for built-in computer screems and dozens of ‘Okudagram’ panels to give the bridge of the Hood an interactive look.
As it became clear Philip, as overseer of the project, would be playing the lead part of Commander Lo’omis, he asked his university friend Jim Rathbone to get involved with the project. Jim was able to source much of the borrowed recording equipment and took on the responsibility of the camerawork for much of the live-action filming. Philip, Jim and Rob also sourced dozens of sound effects and music from a variety of sources.  Jim also brought plenty of editing experience to the table, so took the raw live-action footage to treat and edit together, leaving Philip free to work with Rob and concentrate on the mammoth task of modelling and animating the considerable special effects sequences. Between the three of them the production team, now nicknamed Straitjacket Productions, demonstrated skills in every aspect of movie production – on a budget of nothing.

Several unexpected questions showed themselves during development, such as ‘Just how big IS a Klingon Bird of Prey?’
‘How do you make it look like you have a big bridge and several crewmen when you only have a tiny room and two Starfleet uniforms?’
‘How do you create the illusion of touch screen technology when you only have a wheezy old desktop running Windows XP?’
‘What does an intergalactic time and space-dilating quantum fissure actually look like?’
To find out the answers to these questions and more, check out our Ships page, and watch our The Making of A Tale of Two Galaxies featurette

Philip also had one other problem, his script involved a shipload of Klingons. Philip didn’t know any convincing Klingons, so turned to a Yahoo Star Trek forum and put out a Death Chant to see if any Klingons lived locally and wanted to take part in a no-budget fan-film project. He was surprised by the result, as he had replies from several Klingons around the country. Three warriors arrived one Saturday in May, and we were able to shoot all their parts in one day. We were overjoyed at the quality and realism the guys brought to the table. Without them, it wouldn’t have been the same. 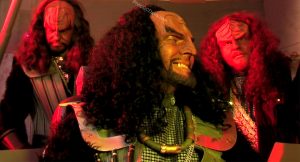 Philip designed and built the sets entirely in their tiny front room in the city of Bristol in England. The live action was filmed over three weekends and the special effects were modelled, animated and rendered on three home computers and several borrowed laptops over several months. The production budget was tighter than a Stormtrooper’s shoestring, but the quality of the costumes, the filming, editing, the wonderful models and the effects belie the amount of available funds. Click here to see a timeline of the production process. 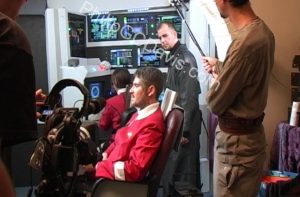 Making ‘A Tale of Two Galaxies’ was a steep learning curve, and we think we came good with a really enjoyable space-romp.  Thank you for taking the time to watch the film and look at our site. We hope you enjoy it as much as we enjoyed making it.

Below are some stills from the film, and renders done since. 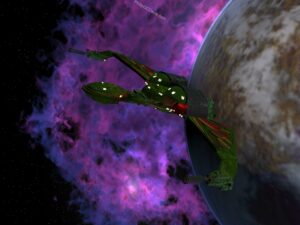 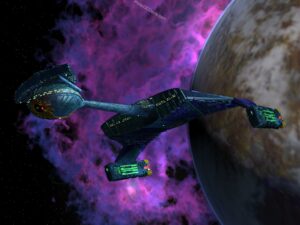 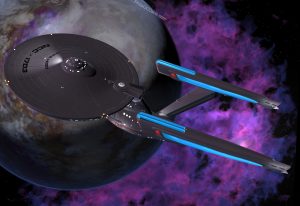 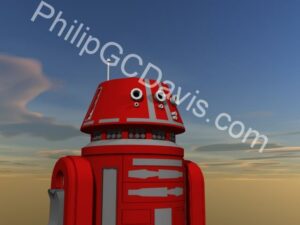 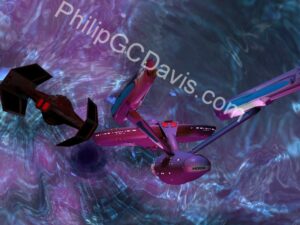 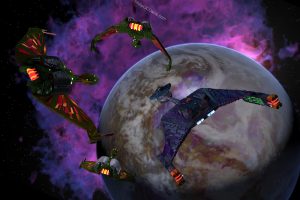 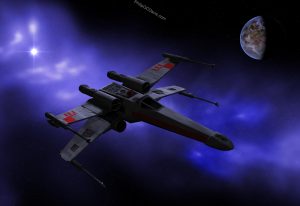 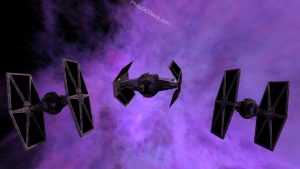 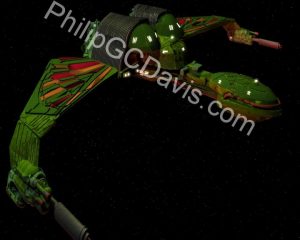 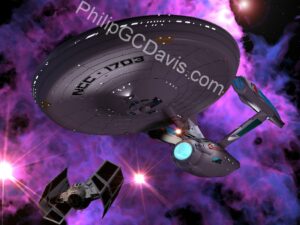 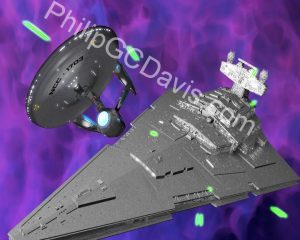